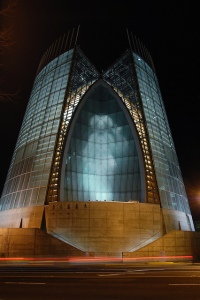 We’d gathered together for a poetry reading none of us wanted to attend. This was weeks ago, the same day a group of men and women gathered in a church for bible study and were murdered by someone from the community they invited in. However awful and angry all of us had been feeling from events over the last year leading up to this day, now that energy had converted into untenable mourning and we all were as if gathered at a wake.

It was hard for me to find the café/bookstore at first, since its tucked in an area of smooth concrete and office buildings. Art here would be an afterthought. But not here in the new Oakland where this café serves beer on tap in mason jars. I’d already walked past it before this brother ran out after me calling me back. I’d just met him the night before at another event and though we were but gentle strangers, I still moved to hug him.

The café/bookstore is modest and comfy with its natural wood bookshelves and tables. Very homey in spite of being surrounded by so much cold concrete and steel and glass. I sat with this New Brother and a woman, whom I knew and who kept choking back tears talking with us about feeling professionally belittled and socially degraded on book tours due to her race, her being Spanish not black. At the end of the night I fell into her arms and hugged her a long time. I’m not usually the one to let go first, I told her. She said we should get together and write sometime and I said of course. Of course.

Across the room, there was a Filipino poet whom I knew and hadn’t seen in person in a long time. I went over to him, and though he wasn’t nasty to me, it somehow felt like I’d made a mistake. Like he was tired or just Done with everything. We shook hands, chatted briefly, but there was nothing he wanted from me and I quietly went back across the room to where I was.

None of us could figure any thing out. And we didn’t want to be there, but it was a book release for a local woman we all respected and liked. And the show must go on, right? It wouldn’t be a long night.

The night comprised of four mini-features and ended with the woman reading from her amazing new book. And though our energy muted, a lot of good work was shared and all the readers solid.

So: the end of the night. One woman I knew, whom I’ll call Tea, here, approached and asked if I wanted a ride home. I shrugged sure, of course. The organizer of the night’s event paid me and I told him about Tea and her work and asked him to consider her for a future event.

But before any of us left, I found Tea showing one of the men who featured earlier a picture on her phone. She took a shot of the Jesus projected on the fancy church just down the street. They were both staring at the photo incredulous.

I wanted to show you this because in your reading you mentioned studying theology in college, She told the man.

The man stared at her photo with his hand over his mouth. Blown away.

They both thought the image, glowing like a beacon on her phone, more closely resembled Baphomet than Jesus. The out of focus halo resembling horns. The hand position. Tea being no avid church goer. Believing more in people and spirit than religious doctrine and the bible. So she and the younger theology student bonded over the odd-looking photo before she and I finally left the venue.

We walked up to where she parked. Her car had been towed. She nearly stepped off the curb into traffic, cussing the air, dazed, confused and angered.

That next afternoon, downtown Oakland, a parade was scheduled for the Warriors recent win. But that was tomorrow, she kept saying. There was no sign when I parked there, she kept saying. Why would they do this?

All up the street, tow trucks glowed, their lights almost appearing to giggle in defiance. The sign we approached said the towing would start at 8pm. She parked at around 7. It was now 9:30. And there wasn’t much traffic to be seen anywhere. It was as if the city slept early in anticipation for the parade. All for a basketball game? she kept asking the empty street.

So, she sat on a bench and went into a series of panicked calls about her car, where was it, fully intending to pick it up that night. I could only pace the sidewalk and half listen as she tried to keep her composure talking with someone on the line who didn’t know this, wasn’t sure of that, asking her to please hold. I walked to the corner and stared up at the church and its projected image and remembered how my Catholic ex-girlfriend called it The Creepy Jesus church. The image is slightly blurred, softened. You know its a representation of Christ. But what if you don’t know, then what is it? In the glow of night, its haunting.

Tea found where they’d towed her car but found it otherwise hard to think.

Part time, she drives for Lyft or Uber or whomever. I haven’t yet used either service yet. So with me still waiting, she hung up from the towing company and then used her app to request a car. Only to find out that she would be charged 100% over the regular fee because right now it was a rush hour.

What rush, she shouted anew. What rush hour are you talking about? There’s no traffic. Do you see any traffic?

Beyond sweeping tow trucks and police lights, I didn’t. Some people walked. A car or two passed. The man who hosted the reading that night walked past us on the phone, his car having disappeared as well.

So I called a cab for Tea and me.

She kept arguing with her phone and the app. How do you get out of this, she said shaking her phone. I didn’t know.

A taxi quietly pulled up next to us. I directed the man to take us to my house. The driver overheard her talking with another person about how much she’d have to pay for her car. After she hung up told us what a racket it all was. You pay the police, you pay the towing service. You’ll end up paying $400, $500, the man said.

We pulled up in front of my house.

I’ll get out with you, Tea said disappointed.

I said no, its okay. Wanting to be done with everything.

I paid the cab fare and tipped him. Then gave her my last two twenty dollar bills to go from there to wherever else she needed. The tow yard and/or home. I hugged her. I got out.

* I had enough money to get us home safely
* Beyond the towed car, nothing bad happened, no one was hurt
* The reading went well
* I didn’t expect to get paid, but I was
* the money I put in the hat to pay the other readers, I got double my money back. I donated $6 and was paid $12.
* The features book was really good

My anger eventually dissolved like ice in a glass of water. She text me a thank you and said she’ll pick the car up in the morning before the parade. I texted back how sorry I was that had to happen but was still glad it ended okay. I took a shot of whiskey and went to sleep.