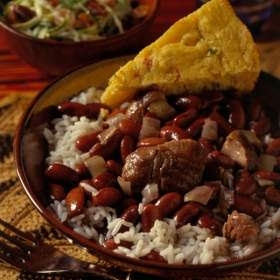 I spent last week reading Blood Beneath My Feet a remarkable true life account from Joseph Morgan, a death investigator from the South. A slim but potent volume, it covers the life and work of a coroner who lived and worked between New Orleans and Atlanta. For all the graphic and unsettling stories and descriptions within, the book also made me hungry. Between his childhood memories and crime scene walkthroughs, there is but a couple paragraphs on the importance of red beans in New Orleans and a off hand method for making them, if I dare not say ‘recipie’. Considering how little I cook, I was moved to slow cook a pot this weekend. (How red beans plays out in the book? Let’s not speak on that…)

I took the package of beans and put them in a pot with water and a good shot of red wine and left it in the fridge from noon till 5:30am Sunday morning. The beans emerged from the fridge looking momma-familiar: split like clam shells, much of the water having been soaked up. I poured out what water remained then re-filled the pot, tossing in a huge amount of chopped celery, bell pepper, onion and garlic. Then hand chopped sage, thyme and parsley. I mourned not having an ginger or any pork and instead quick grilled a package of hot italian sausage, chopped it up and tossed it in the pot– along with a teaspoon of baking soda and a half glass of red wine. Initiate Slow Cooker.

My focus this year. Letting go of expectations, Letting go of judgment, Letting go of the past, Letting go of my brains desperate and false narratives. This year I’ve been reading a lot on Buddhist & Zen studies, non-duality, vedanta. I spent the year collecting quotes and helpful teachings and prayers in a notebook I bought from India. It was, for me, a teaching notebook about letting go and letting be and finding oneself.

I lost that notebook.

Because it turns out… the book itself I bought from a pre-teen boy in India, a vendor near Goa beach. It was important to me to get a notebook and I not only got it, but talked him down to a very low price. It was a book I coveted with its natural paper and leather cover. Because it was special — I began searching for something special to put in it. The teachings I found from Osho, Rupert Spira, Nisargadatta Maharaj, Krisnamurthi and many others all went in that book and were all helpful in finding some inner peace and settling with myself. That book became heavier over the last year, more valuable. Biblical, almost, as far as the truth it was revealing to me.

1) In spite of reading all this ‘non-Christian’ teaching, I recently found myself being overwhelmed with reminders of Jesus–coincidental references, random occurences– to the degree that last week I got a piece of unexpected mail from an old friend. I opened it and it was a comic book from 1979 Jesus, by Al Hartley. Jesus, I guess, was a late comer to the Buddhist philosophy, but he got it.

2) That ‘special notebook’ I bought in India 2012? Christmas 2013, my best friend gave me The EXACT Same Notebook as a gift; the same model, design, color and all. He never saw the book I bought myself. So: the special book I just lost? Technically, I still have one, wrapped in plastic. What was lost?

3) Now, I can’t remember what my 3rd point was. I guess I need to briefly write about my best friend. And how it occurs to me our friendship is over. What we had been for one another, what he’d been for me at least– a brother, family– is over. Its not that we ever fought or crossed any lines for each other. Perhaps the worst that can be said is we grew apart. We’re both deeply involved in our own unique lives, and our stories no longer cross. How deeply this saddens me I can never articulate. But isn’t that the entire point of the study I’ve been doing over the last year? For decades, I’ve fed my sadness, loneliness and frustration by recounting all my lifes failures and losses. To what end? Every note in that book points to one thing, vividly reflected in my friendship right now, should I dare to look directly at it:

Everything changes. Yesterday is gone; there is no tomorrow. There’s just the living, breathing now. All that exists, the crosshairs of yesterday and tomorrow meet in the center of now. Now is all there is. Nothing has been lost; neither book nor friendship, because nothing was ever mine to begin with. I didn’t make that friendship happen, neither did I stop it. I didn’t throw away that book or leave it behind purposely. Things happen under the illusion of us thinking we arrogantly cause anything to begin or end. Its the key definition of destiny we often overlook. Destiny finds us whether we allow it open arms or not. Thy Will Be Done