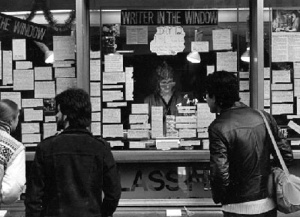 She and I met months ago. We’ve had movies nights, dinner. We’re not dating– I emotionally began pulling back once I truly began listening to her. I need to be turned on from the inside. Maybe last night is a good illustration why she doesn’t do it for me.

She’s a poet and performer and I’ve sat in on readings she’s given before. I mourn writing alone always and since she claimed being a poet, kept nudging her to write with me sometime. We kept rescheduling until last night when she agreed to meet me at a cafe of my choice. I left work and went immediately to the cafe in my neighborhood, even found a table at the window. She text’d me that she was on her way. I sat and began writing by hand. I hadn’t done this in weeks and the words gradually began speeding out of me until, anyone glancing over at me would’ve thought I was practicing automatic writing. It physically felt good to sit there and think and move my hand and let my brain replay a memory while I sketched it out on the page. Two pages in she walks into the cafe– You writing a book, she says– and puts her bag over the chair across from me. I give her five dollars, she goes to order something, returns and opens her IBM Thinkpad and exhales about her already long day. She’s a plus size model so she’s all curves, all soft glowing skin. She’s in a simple white one piece mini-dress– though I’ve never seen her in anything except a mini. Her hair fastened in a box braid bun. She folded her sunglasses and placed them at the edge of the table.

She exhaled stress, money woes, glitches trying to set up an Indiegogo page to raise money for a summer class. She talked several minutes, then realized her drink hadn’t materialized. She went to the counter. I folded my notebook, the one I just used for a brain dump, and retrieved two smaller notepads from my satchel.

She returned, placed her drink near her sunglasses and for a moment stared into her computer. I thought I caught her mumbling something like: She look hecka pregnant. I looked over notes I made in a recent freewrite. The previous weekend I camped out and made notes about sleeping on the beach beneath the stars. I thought: I could work with this. I began re-writing it.

She sipped her hibiscus tea. Smacked her lips. Its diluted, she said. She looked up at me. I looked at the juice, chunks of hibiscus swirling like tadpoles beneath invisible squares of ice. I counted down to three and she got up and returned to the counter to ask them to make it stronger. She returned and stared into her phone. She talked to one woman, then another called. She said: I can’t get three-way on my ghetto phone. She asked one of the callers to do a three way call.

I kept diving back into the page, coming up every other breath like a swimmer to look around and breathe. Two women came in with a baby carriage and sat behind us. One talked to the other about how she just quit school out of boredom. She said she was home schooled, though her mom wasn’t schooling her and kept going to work. Just outside the window, a group of men circled like bees around a chessboard. I miss playing with my friend. I went back down to write and after a few quiet minutes, I saw her hand snake across the table towards me. I looked up. She pouted, and mouthed the words: I’m hungry.

What were you eating for dinner, she said.

I wasn’t planning on eating, I said.

You weren’t, she frowned.

I was getting low on money and it was my rent check; plus I had a long weekend ahead of me.

Minutes. She told me again she was hungry. I told her to think of what she wanted to eat.

I went back to writing. She got my attention again: Ten more minutes, she said. And we should go get something.

Let me know, I said.

I wrote on. She stared into her laptop. I kept thinking about the stars, the landscape of the desert. The distance in the darkness between sunset and sunrise. How cutthroat trout might emerge from a still lake in the middle of the night.

She finished her drink, then said: I’m going to the bathroom, then we can go get something. I’m starved.

She collected her cup and mine and disappeared. I scribbled out the last stanza by the time she came back and we wordlessly gathered our things.

We couldn’t leave though without running into One woman, a coordinator for an open mic I recently visited, who seemed like a great resource for jobs and work. But despite the whining my friend gave, about getting food stamps, waiting for her unemployment to kick in, rent and however she was going to afford this class she signed up for, she never approached this woman professionally asking for employmnent leads or anything else. Neither did she say much to the other woman we passed on the street who was just getting off work and exchanged great hugs with us both. We just walked up the block, then another while my friend kinda rattled off her worries and stress.

You get your writing done, she finally asked.

I said yeah and put my notebook back in my satchel and that was the end of it.

We wandered into a Thai restaurant. At the door she turned to me and said, I’ll get you next time.

You ever eat here, she said.

Yeah, I confessed. I used to bring first dates here.

This isn’t our first date. She said.

We ate. Her never asking me anything, never engaging me with anything. Any questions come from me only. The conversation is around her and if I daringly, selfishly want to share something I have to be quick and be okay with her never listening to what I’m saying, nor seeming to care. She’ll stop speaking, look at me, spear a piece of chicken off my plate. We finished dinner. I found a way to ask her to just say Thank You. She did.

We left the restaurant and found an open art space two doors away. We went in. She approached the woman at the door and waved to herself and me saying, we’re both artists! The woman was talking about the space, how she was open to different events. My friend kept talking about art, her interest in it, and how many people could fit in this venue while I actually looked at the featured paintings on the walls by a artist just returned from Cuba. The work was deliciously gorgeous– color and rendering of characters and light and ideas.

We eventually left to go to our separate places. Her committed to getting home and working 18 to 20 hours to raise money or write or work whatever she was planning to do. I could only hug her, tell her how nice it was to hang out, and go home.