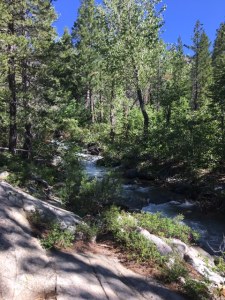 Egon: Don’t cross the streams.
Peter: Why?
Egon: It would be bad.
Peter: I’m fuzzy on the whole good/bad thing. What do you mean “bad”?
Egon: Try to imagine all life as you know it stopping instantaneously and every molecule in your body exploding at the speed of light.

***
During workshop week, I sat with different poets and talked/shared about our writing and performing lives and philosophies. Someone asked about my writing and poetry life and I asked them theirs. Over the days, it occurred to me how many of the writers here didn’t perform or read their work very often in public. Meaning, they rarely or never went to a café or performance space and read aloud anything they’d been writing. I considered it part of my practice. For many of them, it was uncommon.

That’s not 100% true. A couple of the people there were very familiar with public readings. But others, for example one or two of those leading the weeks’ workshops, had no idea how to use or approach a microphone.

It struck me odd if only because I discovered poetry In Public — in this bookstore, or in that café. ‘Spoken word’ is synonymous with ‘poetry’, right? And after years of familiarity, once I heard Gwendolyn Brooks read ‘We Real Cool’ aloud at a sold out event at UC Berkeley did I realize that was the first time I’d ever heard the poem at all.

At the end of dinner on the final day of workshop week, all the participants gathered together and volunteers were asked to recite a poem they didn’t write from memory. It was a way of bringing the classics, the published, the famous and infamous, the authors from different cultures and languages into our current conversation and gathering, grounding us as would a prayer.

But earlier in the week, seated at the foot of a gorgeous mountain and the sun quietly setting behind it, when I asked a woman if she’d ever gone to any open mic events or read aloud, she shook her head, unsure if events like that even occurred in her home city.

I had no idea what to say to her.

I went to an event at a café in Berkeley Friday night, in support of my friend, a writer and storyteller and who herself has never attended any kind of workshop and, now in her 70’s, is ‘starting to consider’ signing up for one since I’d been going on about it.

It brings me little joy to be at a poetry reading on a weekend night, but since she’d been so supportive of me in the past, I felt socially obligated. We walked in and the place was packed wall to wall with people. My friend, S, came over to me and asked if I’d help him do a quick skit for his part of the open. I loved him and without thinking quickly agreed.

“All you have to do,” he directed, “is go: Oh really, and then what happened.”

He signed up first, of course, and instead of his name, signed up as a corporation of some kind. Instead of doing any poetry, he decided to just play– as he’s apt to do– to throw away any poetry and vibe his way through a absurd story or joke he’d made up.

Once the host stood and got the room to quiet, he had me stand with him at the side of the room, then grabbed my wrist pulling me up to the front of the room with him. Like a bad Abbott and Costello routine, we went to it. He immediately began stammering and spitting about being in a horror workshop with a bunch of, in his impression, slow witted, condescending old people. And in his story/sketch, a child was asked to come speak to the workshop group and of course in the story provided the best poem of the night.

The audience applauded, and we sat down as if nothing had happened, allowing the rest of the night to unfold quietly and without further incident. I sat with him. He’d taken out a mini notebook and wrote while the first feature began, giving his manic, impulsive OCD a point of focus to sit still. I took out an equally small notebook and also wrote, mostly to complain about what I was hearing.

I thought about S during my week in the mountains, mostly how much he’d like the area and hate how we were using it. That his OCD and distractions would tickle his impatience too often to even sit and have a reasonable conversation about writing — much less take time to read anyone else’s work. And though he’d love the outdoors and nature, he’d never stay with the group on any hikes or lectures. He’s his own man, uncontrollable, impatient, distracted, impulsive, manic. And hates even the idea of workshops and what he perceives them to be about.

And then I thought: how sweetly he used me to shit on whatever he thought was going on in the mountain, to illustrate how little he cared or respected anything he assumed was happening during my week, and to basically toss his arm around me and flip off the experience I’d just had, while smiling broadly.

And we sat together for a while during the reading, but he had to run off for work mid-way through and vanished. This just before the friend I came with read. I stayed and listened until the end of the night.

I don’t remember anything I heard. My friend who was featured that night and I arrived minutes before the reading began. I did not sign my name on the open mic sheet. Later, when the host announced the last reader on the open mic for the night, the woman I came with turned and stared at me. I didn’t return her gaze. Reading/sharing wasn’t immediately essential. I was there for her.

As the room began dispersing, I chatted with someone whom I’d known for years. I made the mistake of mentioning to her about my week up in the mountains and asked if she’d ever done anything like that and she immediately scoffed. Read: laughed in my face.

Maybe you don’t need it if you get access to the cabin, I said referring to the one she just mentioned in her poetry.

Oh, its run down, she said, dismissively. The structure I’d sketched in my mind immediately fell apart, splintering and sagging as she spoke.

She laughed, hard, over even the idea of a poetry workshop. She’d heard of it, she’d
“submitted something once before, years ago…” but never applied again and she was now 70 so why bother. She knew ____ about Galway Kinnell and _____ about Sharon Olds and what else did she need to know? I felt foolish for bringing it up and left it alone. But as I was trying to make my way to the door, my ride trailing far behind me soaking up the appreciation for her set, I stopped to talk with someone at the entrance whom I hadn’t spoken with in a while. He seemed distant, shy, bewildered and talked about being/feeling stuck and not writing. Lacking anything new to say, I began ministering to him about the prospect of going somewhere if just to get out of town, out of his life, out of his head for a minute. To refresh himself and his work. He seemed to not know what language I was speaking.

I had nothing else to say to him. My ride approached and I leapt out of the room ahead of her.

I nearly thought my ride was going to ask what I thought of her or her work. I expected her to corner me into a review. She waved off anything I tried to say.

These are the two worlds I live between. Worlds that I thought were the same or similar but are obviously not. The rooms are full of poets that periodically share the same people, but they are not the same at all and barely have anything respectful to say to one another.

Years ago, before Poetry Slam even, back when I first began this journey through poetry, I would often sit in on conversations about Page versus Stage poets. Performance artists who sound great, but you just can’t read them. Standing alone in a room with just their work, the poems lose much of their electricity and appeal. S could be guilty of this. I tried reading his book, which is as stubborn a tome as he is a person, and find the book is exhaustingly unreadable and weirdly joyless. Hypnotic in its commitment, its a single poem at roughly 120 pages. Where’s the rest of his amazing poems I’ve heard him do over the years? Where’s the easy exhilaration had in listening to him? Perhaps I should try again, but there isn’t much of a hook to engage me and return with commitment beyond the fact: I know him!

In turn, there are Page poets– who write lovely work but who cannot (or should not) read their own material, and often stamp out any power or joy found in their poems simply in the droll way they read them– reading into their chest dispassionately, as if they held their breath. One of the sweetest, warmest writers I met at workshop is an awful reader of their own work. This reminds me how years ago there was a brother who attended one now-defunct series in S.F. who always used to sign up early and was one of the greatest poets, writers I’ve ever heard. He was someone I still think of and consider, without hyperbole, a genius. He would place his lips directly on the mic and whisper his work, which was deadly personal and close– about death, drugs, relationships, family, abuse. The room would hold its breath and physically lean towards him, listening. He didn’t need to emote. We, knowing he was good enough and worth it, went towards him.

I, naturally, aim for the middle ground. I want to sound good, and I want the poems to work without me. I want anyone to pick up my work and find something of value in it, something to hook themselves with. I also enjoy reading aloud and finding the audience wanting to pay attention. Neither of these things is easy or come naturally. But seems to me an obvious lesson that emerges between practicing and performing. Practicing your craft (writing) is about strengthening your work on the microscopic line level, (which means publishing). Practicing your craft (reciting/reading) is necessary in order to hear what gets received, what gets missed (which means performing, slamming if necessary). Being clear in what you’re communicating. There exists a middle ground between the two, and of course its unmarked. But I think its worth finding and settling in. There’s valuable audiences awaiting both sides of the fence.

But what if improving and getting better at what you do is not the point? What if all you know is all you need to know?