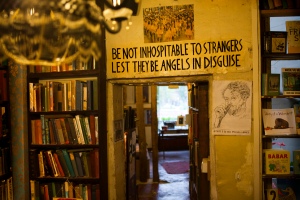 The Lyft driver pulled up and I jumped into the more inviting front seat for a change, asking first if he minded. He didn’t. A vibrant youngster in a backwards baseball cap, his car smelling like chocolate cookies vaped, not baked. He immediately asked where I was going– to a poetry reading at a bookstore (“Do you read your own poems or…”), then asked what kind of poetry I wrote (Gothic, via his understanding, because I settled on describing my work as dark and honest.) and who I liked (I thought Tongo Eisen Martin, but said Sylvia Plath)

An aside here: what do you mean when you ask someone: What kind of poetry do you write? Slam, I guess is an answer. Rhyming couplets is another. Where should I be filed? Who asks lyricists: what kind of lyrics do you write? Romantic or death metal?

He was so young. When he asked me how long I’d been writing, before I told him the mid 90’s, I looked him over and was pretty sure he wasn’t even born then.

Quickly though, he veered the conversation to women and girls. Asked about groupies, asked about women falling all over me after a reading. The balloon of my long denied heart popped having to confess myself a failure at that. I have no game, I said.

All poetry is is game. He said.

I shrugged. Sometimes, I feel more comfortable standing talking to a room full of strangers rather than speaking to just one.

The streets boiled and foamed with rain. The windshield melting as if I were having an acid trip. He turned off the main street we were on, then crazy zig zagged up this street, then down that one before telling me he was from Los Angeles and using Waze.

Then he said: Its all about confidence. You can have the words, but if you’re lacking the confidence behind them…

I nodded. I thought of how weird and lonely it had been for me over the years. Somehow I could move a room to standing ovation and still walk home quietly alone.

And though there were other routes Waze could have taken, we followed the street I’d grown up on. It was dark and wet and out of focus, but there was my old school, the grocery store, the old clapboard house that looked like it should have been demolished in the 70’s now having outlasted most of my family. Finally, there was my former house which was now dark and fenced and no longer recognized me or awaited me with the porch light flaring. I didn’t turn towards it to gawk, either. It was an ex- I had no conversation for.

My driver, though… Why was this like therapy? Him agreeing and saying: I should charge by the mile.

He asked if he could vape, cracked his window and went on.

He considered one-night stands about as good as any relationship. Better, maybe. Said collecting No’s is not a deterrent from continuing to move to a Yes, 7 or 10 people down the line. Always be closing. His friend got really lucky on internet dates, he said.

I listened, wished I’d had a better story to share or even a better life at the house we’d passed. But this kid was vibrant and I liked him immediately. We talked like old friends right until he dropped me off at the bookstore. I shook his hand and swallowed my next line: See you later…, realizing I wouldn’t as he was just a friendly stranger.

***
If you’re going anywhere on a stormy night, you may as well go to a poetry reading at a bookstore. Bottles of wine, sliced cheese, bowl of tangelos. Thought I was going to be late but I wasn’t.

The one other reader to be featured that night whom I was really looking forward to seeing– since he was my cousin, kinda — would be a no show. There were three other readers, two women– one older, polished. The other young and inventive. A bearded dude, then me. I read two new poems, one about an three month old olive which I still had in my pocket like a worry stone, then a longer poem about a woman here in the office who died late last year and who apparently I never expected to be missing as much as I did.

I was genuinely surprised to see one of my friends standing in back of the bookstore, listening. I’d forgotten I’d even told him about the reading. Another friend whom I ran into around Christmas kept her promise to show up and she brought her mother who lived several blocks away.

But no, there weren’t many single women there, there weren’t any young women there except for one of the features. Mostly it was older people and of them, dudes. I sold two books. The bearded writer who also featured introduced me to his husband. We three chatted afterwards about writing about nature. I showed them the dried olive I still had.

An older man whom I knew years ago– longer than that– circled back to me after the reading and offered a ride. He was taking home the young woman who also read and who happened to live one freeway exit past my building. The three of us walked to his car. He passed us copies of the lyrical poem he would have read if the night were an open mic and recited some of it. Despite offering us rides, he insisted on paying for our chapbooks, because as poets what else do we have. He’s 77 now, he said. He’s not of age to be argued with. Our price was to listen to his poem and his compulsory chat about politics: drugs, war and the CIA.

He dropped me off at my building and despite having not seen him in several years, he told me he loved me. I told him the same. He and the woman were pulling off for the freeway as I was closing the door.