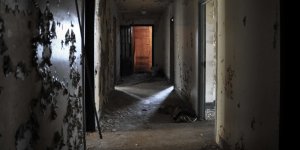 HE awoke screaming again. His head steaming and raw. He coughed to near seizure while some slow moving slime thawed, dripping the length of his throat like mis-swallowed gum. His breath was reticent to move and once it did unobstructed he angrily pounded the bedding with his fist until flurries of sweat rose in swarms akin to fruit flies. The blackened room glowed red within his eyes. Nothing had changed.

A long, heavy chain of days had been spent here in this house that rattled and leaned from one side to the other like some lumbering, clumsy beast marching in place. He rose from bed as if snatched up by his collar and compulsively rubbed his eyes with ashen palms. The room percolated with a milky green haze. The walls were dim and out of focus in the darkness, but he could hear their agitated chattering and scratching

He limped to the bedroom door and opened it, looking out the hallway towards the staircase leading down to the living room. To the right of the stairs the darkness breathed and watched him. In response he coughed and spat on the floor, cursing. The mass welcomed this and smiled.

He scratched the roughed skin in back of his head and coughed a routine prayer: How long. How long.
Downstairs what modest furniture there was danced the rooms circumference as if the entire house was a ship tossed between angered ocean waves. The carpet curled and ripped between the furniture like meat chewed between black teeth.

The house was an ever evolving sickness that worked hard to expel him. The other houses in the suburb were all equally hostile. From one end of the street to the other, the row of them appeared swollen and bruised like severed heads silently snoring behind beards of blackened trees. Their windows depressed in eyeless sockets yet blinked with unnerving shadows floating within. Such horrible things to be assumed through windows greased black.

It was his daily act to walk the neighborhood, though there seemed to be no safe place he could go that would take him. Leaving the space would depend upon some arbitrary unseen matrix, would be as easy as opening a door or window or it would be a locked room puzzle. His hand felt palsied reaching for the door and to his surprise it popped open with no resistance. He stepped out onto the porch beneath an open wound sky. As far as he looked, each house along the row pulsed with an internal seizure, noisily blinking hiccups. Each house was a bully he learned not to approach no matter what show projected along its windows.

He climbed down off the porch glancing across the face of each house which seemed to reach towards him baring some acrid and dishonest benevolence. He walked the length of the block. The sky rolled like an ocean left untreated after a spill.

His memory stalled shyly and failed him. There seemed to be houses he approached before, courage tested, but his body ached having learned well enough to stay away from them. The street felt secure and unlike the houses, quiet. He walked along the reptilian asphalt gently. His daily walks, no matter the length, were depressingly repetitive until he discovered some four blocks away a huge gaping tunnel burrowing down into the earth. Daily he fixed his attention on it, but dared not approach settling instead for just watching it to see what may emerge from its darkness or enter it. It resembled the opened mouth of a drowning victim, selfishly snatching a final breath. It was imposing and dark and cold drawing nothing except his gaze and releasing only steady gulps of steam.

The neighborhood around the hole remained blackly silent and still. He walked onward until he clearly saw it exhale ringlets of smoke. The ground around it were like lips of ashen gray. Nothing grew close to it. What trees there were, were infuriatingly black and malformed as if they had spines that had broken.

At the edge of the hole, he saw something that startled him. Sitting at its entrance was a small boy seated on a bicycle. The man’s heart cranked one way then another. He stopped several paces behind the boy who quietly focused on the blackness sighing smoke. The child was clean and calm. He wore a jean suit with a simple white shirt lined blue and red. White sneakers glaring against the stubborn ashen blackness of the soil. The bike was a red mini racer with raised handlebars.

Where did you come from. He stammered.

The boy turned towards the man’s voice but not to look directly at him. The boy appeared more sad than surprised.

Stranger, the boy diagnosed. Then turned his attention back on the nucleus of blackness and its tongue of smoke.

The boy looked at the sticky black ground which churned slightly as if it itched.

Why is everything in ruins, the man asked the silence. Why is every here place haunted?

What you dream last night? The boy finally said, asking the dirt more than the man. Remember?

I..I… I The man shook his head, no, and remained silent. Then: I worked as a driver at a firehouse, he said. It seem like…one day the alarm went off. Everybody looked at me, waiting for me to start the truck cause no one else knew how. But we’d never had a fire before either. And everyone was waiting on me. Just standing around, waiting. And I couldn’t remember where the keys were or nothing. But, seemed like, I went through everything. And I found them and we get to the building, and its like, the building is painted in fire. Everybody runs knowing what to do. But I just drive the truck. And the chief comes and yells at me to help. I get on the ladder and it extends all the way but the building goes right into the clouds. I look and the fire and the clouds blend in to one another. I see people hanging out the windows but they’re so far up they look like seeds. My heart is just… And then. They all jump at once. Just start floating down to me. I got nothing. Not even a hose. I’m just at the top of the ladder. I yell at them to stop but they keep coming. Getting larger above me. And I just. I wake up. Right then. Choking from the smoke in my room.

The man stepped forward. Within the nucleus of the ring, the darkness moved.

From within the darkness, the man saw the outline of a figure take shape and approach. A head, hanger of shoulders. An arm. A torso. The dim shadow made the man more afraid and he began to back away from the boy and the ring. Finally the man saw it was but another young boy, looking dazed. His skin ashen and his eyes saucer wide and glistening. He approached the boy on the bike who motioned for him to sit on the handle bars. He kicked off. They rode straightaway into an accepting darkness. Going towards no place as the man could see. No tiny lights awaited. The street just veered off into nothing, as did the boys.

The man began to run after them. Words shooting from his mouth automatic, every floral apology begging acceptance he could think of. They didn’t look back. The smaller boy kicking pedals, his weight shifting. The other boy on the handlebars held himself in place. The man’s lungs burned. The boys took straightaway down the street, getting smaller and more dim in the darkness until they were gone and the man was alone again. He stared deep into the narrowing distance, as trying to understand something and couldn’t.

He took one street then another back to his familiar residence. The yard was busy with black insects swinging back and forth through the air a kind of beaded curtain. They rose from the oil slick lawn like smoke. He passed through the front gate. The house stared down at him coolly, then opened its mouth letting him in.

One Reply to “A Stranger’s Dream (A Halloween Story)”