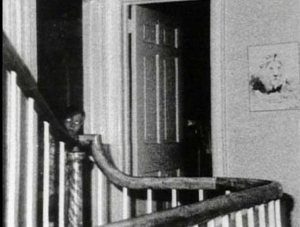 In the mid 90’s, after my mother died, my house was haunted.

The only house I’d ever known, The only place I’d felt safe and loved. But at the time there had been a series of deaths– not in the house, not violent, but all familial, all relatives. My father’s death surprised me. And I’m sure he expected to walk out of the hospital after his last visit. But after he died, I’m not sure if I

A) Really saw him looking at me from my bedroom doorway, which was weird because I thought he looked healthier than when he was in hospital
B) Really wanted to see him and talk with him one last time and apologize because I was an adolescent ass to him his last few months.
C) Was Really Dreaming, or Really Tripping

Several odd occurrances happened in the years between my father’s death and my mothers. But after my mom died, the weirdness increased.

I generally did think there were rats in the walls of that house, agitatedly chewing wood behind the wall. But I never asked myself: Why only my bedroom did that scratching occur? Why in one specific place– behind where I usually sat to watch tv, just behind the headboard of my bed? Because I thought it was animals, it annoyed me– it didn’t scare me. The deep crunching noise would begin and I would pound the wall in response to frighten whatever it was away. It would. For a while. I wanted to crawl beneath the house and find that sweet piece of lumber and see what teeth marks on it or evidence of an animal. I never did.

And skeptics call it sleep paralysis. Where you’re in bed, paralyzed, hovering between sleep and wakefulness. You’ll dismiss the sounds I’d sometimes hear laying in bed early mornings; a sound like a cocktail party in the next room where everone is speaking at once. A moderate conversational buzzing noise, all english, but I couldn’t pick out any words. Until after my mom died and deep within that noise I heard her voice. Not exactly what she said, but I could hear her, as you could pick out any familiar voice or laugh mixed in with others. The stew of voices usually scared me and I’d pull myself awake urgently, not understanding or wanting to listen. But my mom was my last close relative. I didn’t expect her to die either and without her I was desperately alone. When I heard her voice, I was no longer afraid or intimidated. I knew she wouldn’t hurt me. I kept saying to the voice, Help. Help. And since you don’t believe any of this, you also won’t believe I once heard her say in a huge, controlled whisper– as if she were using everything to speak– the words: One Whole Week.

I waited a week. I don’t recall what happened. But it must’ve been positive, helpful. I lived, and I’m still here living, Thank God, writing this now.

I recently went through old journals that kept me sane during those years. I was surprised to read and remember how after my mom died, she returned, and was a bit pissed off how the house was in disarray without her. In my sleep, I heard her in the kitchen say something about not having any laundry or dish soap. I was not with my mom when she died– her doctor called before sunrise one morning and told me. But I also journalled about having this ‘weird dream/sensation’ that I ‘met’ my mom in some kind of void, where I could see nothing except her and we hugged. The background was unpainted walls or smoke. All I saw/felt was her. She wordlessly approached, I felt her in my arms, and that was that. Maybe you’re a skeptic and you easily label it a dream and walk away.

My mom collected figurines, decorative plates and tea sets from all 50 states. At her funeral, many relatives took, claimed, stole, and asked for those plates. She had two wax candle figures of a little Quaker boy in a top hat, and a little Quaker girl in a blue dress. The girl was sculpted in a prayer position with her palms together, at her lips. One afternoon of depression and failing to find a job, I took the Quaker boy and lit his candle, then stood him center of a small plate. Only an inch high, he burned down to a grey puddle in less than an hour. Then, I took the little praying girl, placed her in the hardening puddle on the plate, and lit her.

She burned for about 12 hours. The flame went down to the tiniest yellow/blue seed in a small melted wax crater in the plate. By this time, I had roommates so I took the candle, and its flame and put it in my room to let it burn out naturally. The afternoon became night and I went to sleep. In the middle of the night, I awoke and saw that the flame had grown hotter and rose about 6 or 7 inches high, and had gotten so hot the plate it was on cracked. I watched it, and waited until the next day when it finally extinguished itself.

Coincidence, I guess. Huh? Bolstered by the wax of the first candle, the second thrived and burned the whole night through. Just science. Nothing weird, right?

If sleep paralysis includes the sensations of someone sitting on the edge of your bed, then why haven’t i felt that in more than 10 years? At the house, for several weeks on a regular basis, I would feel the edge of my bed sink as if someone had placed a suitcase near me or, more precisely, just sat the fuck down. I kept thinking, if I could just move and look I’d see someone sitting Right There. I remember this happening maybe twice after leaving the house, then no more. Guess I’m all better now, huh?

What happens to us at death? Any senior citizen will tell you truthfully, they don’t feel their age. Their body may be 70, 80, 100… But inside, they say, they don’t feel old or like they think they should feel. What happens to that feeling, that awareness after the body dies? Do you expect it to dissolve like water vapor? Bad simile: water vapor never dissolves, it rather becomes something different. What do we become? Maybe you don’t believe in ghosts, and you doubt the black cut out I saw one morning was ever a real person, but instead a play of shadows, a sleep induced hallucination. I won’t bore you with the part of the story where others in the room saw it and spoke of it before I ever said anything. Because I was a child then, and no one would believe a child anyways. They’re all active imagination.

But I’ve told the story of meeting my grandmother before she died several times. I’ve talked before about the dream I had and how she woke me from it, her warm hand on my cheek before finally dissolving into the ether and never to be felt again. But what I’ve rarely shared is this: that years after that incident, I finally sat and spoke with my biological sister. I’d only met my grandmother 2 or 3 times after I found out I was adopted and just before she died. I’m still don’t clearly remember her name. I told my sister about that strange weekend; how I couldnt go to the funeral but dreamed I did. How the funeral was on a roof in my dream and there were flowers and an open casket and a lot of empty chairs, all stand ins for the relatives I’ve never known. I mentioned how the dream stopped and I felt a hand, but I couldn’t move until the hand raised off me and how that scared me and sent me to pray it away, even as I knew deep in my heart exactly who it was. Somehow I felt comfortable enough to tell my sister that weird story, okay if she just laughed it away or called me crazy or whatever.

Instead, she said. Yeah, that’s granny. She was always very touchy feely.