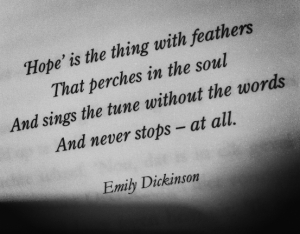 I’ve been holding a notebook full of poems but haven’t been able to read any yet. The most important part of my writing process is running new material before an audience. Its not always enough to just read it aloud for myself (though that always helps) But part of the reason to create anything is to share it. I wonder: How do they hear/receive it? How does it feel reading it? Is it overwritten? Clunky in spots? Is it funny? Do any of the strangers in the room dare approach me afterwards to say … ANYTHING?

Well, I did read one of the poems in from that notebook as the opener at a packed poetry slam. The poem is not hard core or loud, more conversational. The one joke in it I expected a laugh for went by quietly. But– it scored respectably. And when I sat down, an older gentleman leaned forward and kept whispering something. I got my ear to him: You were robbed, he said.

None of the poems I wrote are ‘slam-able’. I’m happy with that.

I’ll have opportunity to run them all this forthcoming weekend. I’m going to three different events which I’ll write about after Monday. But for now, there’s this:

I was home, already in pajamas– doing laundry and finishing dinner when my phone rang. My new friend whom I went to that aforementioned slam with. She said: I should have let you know earlier, but I’m at the open mic at the coffeehouse.

That coffeehouse was less a mile from my house and I was bored. They haven’t started yet, she said. I’m on my way, I told her.

By the time I arrived, the were projecting a video off youtube. A Local filmmaker had produced an eerie yet compelling dance video where a solo male gesticulated and rolled his body while splattered with paint and the background and foreground shifted with special effects and colors. The music, gentle west african drumming.

I came in and quietly sat behind my friend before she found me. She turned around and handed me the poems she’d read earlier as you’d hand someone a menu. But it felt rude to read. I skimmed over the words, but hadn’t time. She said something about the open mic sign up and pointed generically somewhere behind her. I turned and saw a brother standing at the door with a huge, curly afro. He knew what I wanted, got my name and crossed the crowded room to write it down somewhere. The video finished. The host, an older brother with grey dreds long as walking canes, came up to the mic. He introduced a woman who did a sweet comedy routine that could just as well work as poetry. Another man doing brief stand up. And then me.

The poem was a experiment; me playing with iambic pentameter (because… why not) and painting a picture of something that happened to me months ago that I hadn’t been able to stop thinking about. Its a simple poem about, well, drunk cuddling. But it was received really well and encouraged me to read it again and consider submitting it to a journal eventually.

I knew several people in the audience, though I’d never attended the series before. The friend who invited me, she hugged me and said: I got us a ride. She pointed over to a small statured woman with thick hair, silvered and swept back like an ocean wave.

I remember you from Victor’s Cafe, she said.

I audibly gasped. I kinda recognized her and only when she said that did the memory slam back into me. I hadn’t even heard the phrase Victor’s Cafe in years. The place had been under new management and without a open mic series for 15 years.

The older woman and I volleyed conversation back and forth while my other friend quietly listened, then stopped us when we passed two men approaching on the sidewalk.

One of the men was a shady photographer that she’d worked with before. She was glad he didn’t recognize her.

The woman apologized for her simple four door car. It smelled like cigar smoke. I jumped in back and the woman talked and talked. At first she screamed at a truck that passed just as she was pulling out of her parking space.

Now see, she said. If yawl wasn’t in the car I’d go after that asshole.

She drove around back to the main street. The girl in the front seat and myself live near one another. I walked to the cafe. But when we got to the intersection, our driver instead of making an appropriate right, made a left, all while arguing against the using the freeway which ran adjacent to my house.

I said nothing. Two things occurred. First, I was so bored I was okay with maybe having to take a long way back to my house, or even having to take a bus. I was okay with just being with the ladies and chilling. Second, the driver never really stopped talking. She completed her left and monologued as we drove further downtown until finally we pulled up in front of where my friend in the front seat USED to live.

Oh, I didn’t know… I thought

I lowered my voice between the ladies and said this: If you don’t want to use the freeway, I can tell you how…

She cut me off. She didn’t have problems with the freeway, she told us. She lives in East Oakland. She just thought she was coming HERE instead of, you know, asking….

So we jumped on the freeway and the woman talked more, while my friend quietly listened. My friend said nothing when the woman mentioned wanting to do a ritual between the new and full moons.

What kind of ritual, I finally asked.

And here’s where she told us she was a witch. A good one, she inferred. And I looked and realized she attached feathers to her rear view mirror. She said several things between cussing out other cars while we sped down the freeway. She talked briefly about her ritual, the idea how anyone really, not just a witch, could plant a desire and watch it harvest between the new and full moons. She talked about her comfort in living alone and being naked in her living room. And through her story, asked herself rhetorically, “What am I doing in a black dress and lipstick dancing in my room at midnight?”

There was no answer, neither I nor my friend had one.

We got to my apartment building. I had to ask three, four times without shouting from the backseat for her to pull over. She finally did, way down at the bus stop.

I was grateful and surprised by the ride. I wanted to hug her, but my generous thanks unnecessary as traffic sped around us. I reached over and touched her arm. It was good to see her, I was thankful for her ride. I stroked my friends bicep then as the woman finished talking, and my friend lay her head against my hand. I like her to, but its too soon for us. I jumped out of the car, surprised to feel so happy and light. Unlocking the building door, I recalled leaving laundry in the dryer downstairs…