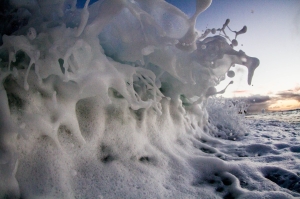 I stood on San Francisco’s Ocean Beach, hours early to a wedding of a friend. I was alone and staring out into the expanse of the sea. It was between storms, the clouds rolled as if being poured into the sky. This was the first time I’d seen two different oceans within a week. At Christmas, I was standing in the Indian ocean among a lot of Indians–the water bathwater warm and the salt spray helping my congestion. I’m no swimmer and only comfortably went in up to my stomach, occassionally dipping down to scoop up seashells and drop them into my pajama pocket. The Xmas Day weather hot, the sky indecisive between orange and raspberry as the sun began to set. People bobbed in the water, shouted, played or just stood there like I did, watching the children hang onto the incoming waves, squealing as they were lifted up and turned over.

In SF, it was ice cold, misty. A chocolate lab ran the length of the beach, his tongue loose and trailing some distance behind him. People stood with their arms folded across their chests and watched the cottony waves rise and play, unadorned even by surfers or gulls. Equally ominious and beautiful. The sky began to darken and it drizzled. I returned to where the wedding reception would soon start. Two long-dating friends married. I only knew the groom from work, so the closest of my work family arrived. The groom asked if I’d speak and I did, improvising something brief, prayer-like, family centric. Whatever I said, I remained sober enough, long enough to not make a fool of myself in a room full of loving strangers. And the remainder of that weekend, the days surrounding the new year, were fine and lovely.

But its now a year later. Why am I thinking of that wedding? I’ve been reading books on Zen, Buddhism and awakening in the last two weeks. Thinking about my year, my life, It suddenly occurs to me there are no less than two oceans churning within me.

This has obviously always been the case as I was adopted. I’ve carried this sense of division within me for decades: memories of the family that raised me that has now all but died. Then thinking of my place amidst another family, my biological family, which didn’t raise me and of which I now feel I don’t belong. And further: thinking of my close friend who has let me co-sign on his life and who has given me a seat at Thanksgiving, Christmas. I love my friend, his mom and their generosity even as I hold my breath awaiting the moment when it’ll all be over, a memory. So many of the people I’ve loved are gone. I’m paranoid against allowing myself to ever love again, having seen so many die or just turn away leaving me emptyhanded, adrift.

Family is temporary. Love a myth.

Earlier this year, I sat with another friend and his long term partner. My friend’s mother had died days before. He understandably sat with the darkness I’d known all too well and it wasn’t fun. He and his lady sat on my sofa while I sat across from them on the ottoman. “I don’t think I would have made it through this without her,” my friend said of his partner. “…I’d just be standing there, stuck and she was there to help me, guide me.” He said. She was Indian and from the area I’d visited.

Then he said to me: I don’t know how you did it. How you made it, through all that. Alone.

I don’t know either. I never had a choice. Maybe that’s how.

But a year later, I’m slowly coming into a gradual understanding. There are no less than two oceans provided for each of us. The ocean we know and the ocean we create.

We, like fish, exist in a world we take for granted. Not understanding that we’re part of what’s around and supporting us– not separate from it.

All of my struggle has been mental game where I feel separate, cleaved from everything and everyone. But its a world I had to create for myself to survive. It was my way of understanding and settling with all the changes to what I thought was my family. To whom I thought I was. I had to create a separate world to keep me safe from everything in the past that damaged and left me feeling so defeated.

That is my second ocean. An ocean of thought I created for myself. An ocean I believe to be deep and wet and real, but isn’t. The ocean of my own myth, the stories I was told and the stories I believed true. The things I think when there is no voice heard except my own. If practitioners of Zen believe the ‘world’ is a dream-like construct, then our minds, the things we dwell on comprise a second world. A world of non-true stories that are the projections and beliefs we’ve created to comfort ourselves.

But my story doesn’t comfort me. It may contain The Truth, but its just a story–a buried bone I exhume to chew on. Something to remind myself who I am and where I come from. But my story is just a story. For a fish to understand itself and to know how its world is wet and oceanic, doesn’t help it live and eat. Its story doesn’t matter in the instantaneous moment where the fish exists. Neither did my story or memory or identity matter while I stood amongst the waves in India, picking up seashells from between my toes.

My story has been a burden, and it saddens me to mull over its assorted facts. Its taken me a long time to settle with how yesterday– shoot, even This Morning– is dead. Suffering arises over things that don’t exist; projections. A memory that creates longing. A fantasy that breeds envy, jealousy. An assumption that creates fear or hatred. How foolish to stand barefoot in one warm ocean, yet think of another colder one!

The me who has suffered, still exists, safe and unblemished. It waits and watches. Flashes of memory arise in a similar place from where I create and project scenarios, answers and dreams that have never happened. I’ve lived in and physicalized sadness because that’s most of what my mind has had to play with over the years.

I float safely in one ocean, while dreaming of another stormier one.

One year from now:

Let go of the dream. You hold and squeeze things so tightly out of fear… In the end, what exactly do you expect to keep? Let go into faith. Let go into now. Let go and float. One ocean is enough. Over the course of a lifetime, there’s still no way one can drink all that water. Let go and wake up.

One Reply to “The Two Oceans”