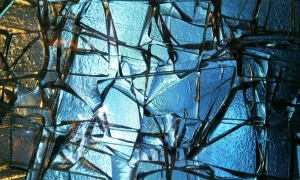 I was hit by a van this morning.

My first day back at work after taking half of my birthday week off, and this happens.

At the intersection, I waited for a huge, slow moving blue bus to lumber to the corner and do a meditative right turn.

The light changed as the bus was turning.

Behind the bus, less a half block, was a white delivery van. The van stopped.

I began crossing the street.

The van’s driver hit the accelerator.

I didn’t take it personally. But to see the van speed towards me from about 10 feet away was, in a word, a surprise.

The driver’s side hood slammed into me. It wasn’t going fast, really. I held up my arms to push myself back from the passing van. Clumsy impact. I punched the driver side hood. It wasn’t hard enough to take me off my feet or be hurt.

The driver stopped (for a microsecond I thought he might keep going) opened the door and apologized.

I apologized back– I thought the light was for me, I said. It was.

I kept walking. And kept thinking… about fathers.

The previous day, I sat with family, who seemed to stare through me to say how much I resembled my father. Because I had been adopted and raised by another family, I never met my biological father– who died a few years before I met my biological family. I often feel myself turning into someone I don’t know. To stare at myself in the mirror (which I can’t do) is to gaze at a kind of common stranger– the person I see regularly, but whom I don’t know.

Like the van’s driver. I’ve been to the business the van delivered for, and when the panicked driver got out, I recognized him– but not by name. In my memory, he’s labeled as “oh, the dude from that place.”

I wonder … if part of me looks at my own reflection with that same kind of tolerant familiarity. Me: the known unknown.

The woman who hugged me yesterday, whispering ‘baby brother’ in my ear, saying how much I looked like ‘her daddy’, is my sister– but not. She’s not a sister I trust enough with my story. She’s not someone I could call and talk with freely or whom I could trust would really hear me. She is not someone I could pick up the phone and say: I need you or want to see you or even… I love you. She is my sister, but she is not family.

The older woman with me on the sofa, the one moaning and groaning about getting older, how good it was to see me, and who kept looking at me calling her long dead husband’s name, is my mother… But she is not a mother to me. I speak the word ‘mother’, but my heart says Nothing. My heart says: here’s the woman who chose not to keep me. Here’s the woman I’m to forgive and love anyway and cannot. Here’s the woman around whom my heart feels homeless.

Near sunset, my ‘sister’ and ‘mother’ offered a ride down the hill back to the Bart station. I jumped in the backseat, with a young woman and her infant daughter and I sat next to my great neice who angled her back towards me, offering the same that I’d given her… nothing.

I remembered her as a tiny child; us playing beneath the living room table at my ‘moms’ house. She does not.

My great neice her friend and I all got out the car together. The young ladies unfolded the baby carriage while I offered goodbyes to my mother and my sister who reminded me: You can choose your friends, but you can’t choose your family.

So… I walked across a footbridge, with my great neice and her friend pushing a baby carriage. My neice pushed down on the carriage to jump the sidewalk, but it went sideways and stuck. My neice kept pushing it forward, instead of lifting it up. I picked up the front of the carriage and she pushed it forward and the two girls and I walked on to the station.

Did she look at me? Thank me? Smile? Grunt?

It felt… awkward. How we were related, yet less than strangers. It was half her being a teenager and half her… well, I don’t know.

The girls didn’t talk and I walked along with them. Anyone seeing us would have thought we didn’t know each other. And we didn’t.

We arrived at the station, but they walked past the gate– presumably to move towards the elevator. Never looking back, not talking. I wanted to say goodbye or say: its good to see you, or wishing you well or hug her or kiss her or wave or something. I heard a train pull in two stories above. I saw my great neices’ narrow back and the long, solid strides she and her friend made behind the carriage. I said nothing and ran upstairs.

…I don’t know or understand what I expect from family, or even myself. Identity for me is a shattered mirror whose different shapes reflect slightly different stories.

Earlier this weekend, I spent the night over my best friends’ house. This after hanging out with him and his mom and watching the Maywether fight. I woke on their couch in the living room, comfortable, warm and welcome. I felt more family love in one night on my friends couch than in all the years navigating the family I belong to by blood. My friend is more a brother to me than my four older brothers combined.

My cell phone woke me by surprise– It was the aunt I’d grown up with. My adoptive mother’s sister, the only relative from my childhood I’m still in touch with. She’s in her 80’s.

I told her I was alright. I told her I was sorry I hadn’t called in a while– the last couple of weeks, I’d felt down. She said she saw it was my birthday ‘on a piece of paper’ she had. I told her the people I was with was like family to me. I told her everything except how sincerely I loved them, which I did. I told her, with them I felt like I did when my mother was alive. She said she was happy that I sounded happy, in spite of just waking up on a couch wrapped in a comforter after a night of drinking. I told her how later that day I was going to have brunch over my neice’s house… I told her I did connect with my biological family, but that it sometimes felt weird and didn’t always feel like home to me. I asked about her adult children, my cousins whom I don’t talk to any more. In spite of one getting out of jail and another wrestling with drugs, she said they were alright. We both said how good it was to hear one another’s voices.

Looking over my life is like looking into a shattered mirror. I am still t/here, whole even, amidst everything before me being so broken. Reminder: I’m not broken. its just when looking at the entire picture everything seems shattered. But to look at the individual moments, to focus on the pieces that make the whole, this is my life’s goal on the road to peace.

This morning’s accident? That’s what being told I was adopted felt like. Having something slam into you out of nowhere and then leaving you… just leaving you… to somehow go on with it.