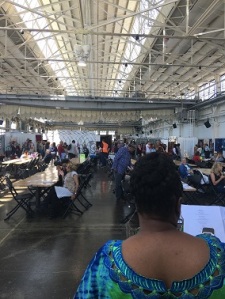 I was the first to arrive at the venue Saturday night for the reading. The venue is a nurturing writing space for women in East Oakland, where my friend A_____ volunteers. If you hadn’t been to the place before nor had the facebook invite, there’s no way even the next door neighbors would know anything was going on here tonight. The question though, if they had known, would they’ve showed up anyway?

A simple screen door was propped against the entrance, primarily to keep the cat in. I slid it open and stepped in. The only eyes on me were of the cat from beneath a curtain a few feet behind the door, staring me down with grave suspicion. I stepped in and announced Hello. The voices I heard were all well in the back of the house. The lobby I’d entered into was a business/art space: a simple glass cabinet to the immediate right, a curtained off storage room facing the door (where the cat hid) and just above that was a apparent sleeping loft accessible only by ladder. The main room was a nice sized, ringed with hand drawn art and small paintings, then a small bookshelf on the wall beneath the loft. There were chairs and two sofas lined against the walls. I looked down and saw a very expensive video camera sitting alone on the chairs with a microphone on a pole. Daring and assumptive to leave it there, I thought.

I also thought to walk down the shotgun hallway towards the back kitchen from where the voices emerged, but wasn’t that interested. At the end of the hall, the closed door on the bathroom opened and A_____ stood there enamored to the mirror. She was in a floral skirt and fishnet stockings, her hair braided and extended into twist donut, angled on her head like a sailor’s cap. She came down the hallway to greet me and fiddle nervously with various things; her laptop, the chair placement, then making sure the cat couldn’t easily escape. More women began to enter the space and hover and talk. I recognized one attendee and we chatted warmly for a while. Then R______ showed and walked around quietly, her head down mostly. When I greeted her she kinda grunted then sat back down. Three videographers appeared, all in black and better to vanish into the background, my dear. The curly haired producer handed out release forms which warmed my heart — with the prevalence and arrogance of reality tv I wondered if producers even bothered with releases anymore. One person in black picked up the camera and another the audio pole. They disappeared into the background like unhelpful waiters shoving platters of nothing into your chest and mouth.

The room shrank as more people appeared and I didn’t feel any anxiety, which was good and comforting. I didn’t even feel as allergic of the cats as I did my first time here. Tonight, my eyes watered but beyond that, I was cool. The show, of course, didn’t start on time but it did started. A_____ announced that despite being full of people the room was strikingly solemn and quiet. She turned on music from her laptop which didn’t help since I was right across from the machine and could still barely hear it. She said the filmmakers were here because she was being featured in a documentary, then all but curtsied. She passed around a little notebook for all present to sign in.

The night was in dedication to Mothering and all the definitions around it. A_____’s mother was honorary mother in the audience, and quietly swelled with pride. That she talked about her being a survivor of abuse by both her father and stepfather, yeah– I had to consciously NOT turn my gaze towards her mother right then and park my curiosity over what she might be thinking. We been thru it all over the years, A_____ said. Yes, Lord, her mom said.

Most of the opening features were writers in residence at the space and they talked about their mothers, of course. One writer read from a textbook on bullying she co-wrote with her mother. Another read about her unique experience as a mother and shared a story inspired by purchasing a Christmas tree. Several of the writers were uncomfortable in public speaking and warned us in case they were awful. They weren’t. A nice short story told here, a very brief poem shared there. The woman with the brief poem, told a better story via introducing herself than the poem itself. After telling us her history of abuse and how she and her three kids are starting over and now living with her father after going through a divorce, I better understood why she entered the room without ever seeing or speaking to me– instead negotiating around me as if I were a stanchion holding up the ceiling. I was a dude–and automatically a card carrying suspect for prospective assholery. Alright alright alright.

The reading was scheduled for 7-9. At 10 minutes to 9, A_____ gave the room a time check for those who needed to leave but demanded the room immediately gather for a group picture. Then she explained she was leaving the bay area for Stockton first thing in the morning. This after being priced out of her apartment, and of course gentrification. The room rattled with surprise. She briefly told of her grandmother who lost the lease on her home after XX number of years, a story many of us know well and are used to hearing.

Half the room emptied out before it was time for me to share. I wanted to be here because under a theme such as mothering, I saw myself with a unique story. Until then no one mentioned adoption foster children. For years when someone mentioned Mother to me, my mind went in two directions. I read poems for both my mothers, which I rarely do, though the mother who raised me was certainly represented in a more positive light and with more material. But somehow it felt nice to finally represent both of them. My oldest poem about my adoptive mother made the room hungry. Right in the middle of my reading, one woman got up to leave and I compulsively hugged her. The other male in the room, a youngster all afro above a rail thin body, sang a boys II men song, of course. R_____ shared a wonderful off-the-dome story about her daughter rejecting her as a mother from infancy. Another older sister I knew, my self-elected God-Mother, recited an older poem with a ferocity and life that the remaining audience seemed to ignite itself on her words. Very good word to end the night on.

And a great night it was. We were done at 10:10. There’d been a positive and warm night that flowed wonderfully well with strong words and good work. A rare Saturday night reading I attended and left without holding any regret or snark.

One Reply to “Mother Stands For Comfort”